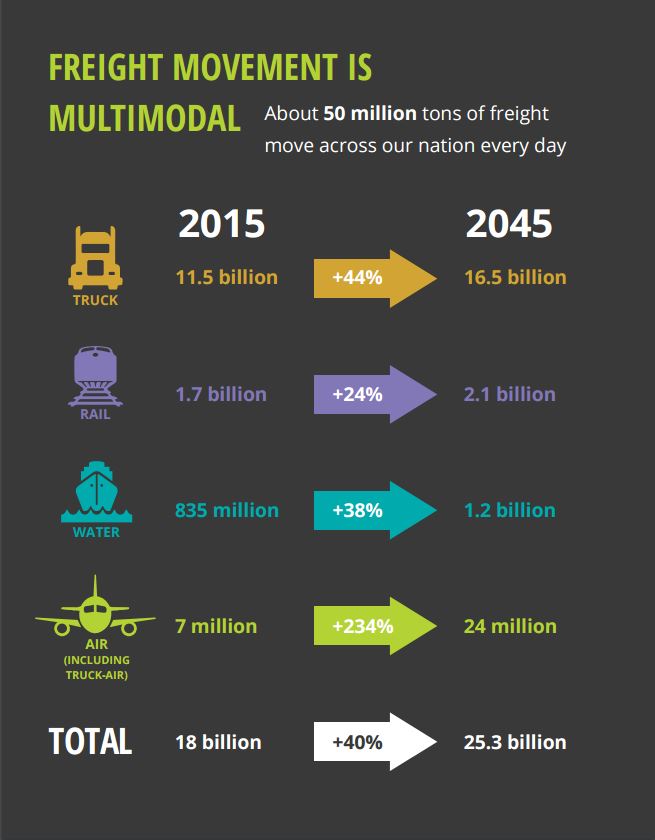 U.S. Transportation Secretary Anthony Foxx released the final Beyond Traffic 2045 report highlighting transportation challenges the United States will face over the next three decades. The report finds that the U.S. transportation system, and the current planning and funding mechanisms, will not meet the demands presented by trends including population growth, climate change, and new technologies like driverless cars.
“Beyond Traffic started a long overdue conversation about the whether our transportation infrastructure will keep pace with our changing country,” said Foxx. “The final report again shows that if we do not invest in our infrastructure, we will let conditions move us backwards.”
Beyond Traffic 2045 was the product of more than two years of research and study by the U.S. Dept. of Transportation (DOT). A draft of the report, published in February 2015, was downloaded over 500,000 times from the DOT website, and the agency noted it received thousands of comments from the public through workshops, webinars, and online feedback. Foxx and DOT leaders also held public meetings in 11 cities across the country in late 2015 to explore the challenges facing each of the emerging mega-regions.
The report is a study of the major trends that will shape our nation’s transportation system over the next 30 years. The report looks at broader trends, such as population growth and increasing freight volume, as well as issues of economic opportunity, transportation funding, and emerging technologies, to identify the key transportation challenges that the United States will face.
Questions and trends explored in Beyond Traffic 2045 include:

– How we move – America’s population is expected to grow by 70 million by 2045, and by 2050, three-quarters of Americans could live in eleven emerging megaregions – larger geographic clusters in spanning multiple cities and communities.

– How we move things – Freight volume is expected to increase by more than 40 percent, partly driven online shopping, adding extra demand to our transportation networks.

– How we move better – Automation and robotics will affect all modes of transportation, improving infrastructure maintenance and travel safety, and enabling the mainstream use of autonomous vehicles.

– How we grow opportunity – Middle- and low-income American households spend, on average, nearly 20 percent of their income on transportation and 40 percent on housing—higher shares than for wealthier Americans.

– How we align decisions and dollars – Federal gasoline-tax revenues have failed to keep up with our transportation needs and could decline further as vehicle fuel efficiency improves, and inflation further erodes purchasing power.

One of the key issues examined in Beyond Traffic 2045 is the cost of increasing traffic congestion. It finds that the average American driver in a city or a suburb will spend an entire work week sitting in traffic, the annual cost of congestion delays and lost fuel is $160 billion, and that truck congestion alone will cost $28 billion in wasted time and fuel this year.
In his introduction to the report, Foxx outlines three strategies that need to be employed to ensure that America is able to meet the challenges of the next thirty years: take better care of our legacy transportation systems to keep our roads, bridges, and ports in good repair; fund and prioritize new projects based on future projections, not outdated models of how people moved in the past; and use technologies and better design approaches that will allow us to maximize the use of our old and new transportation assets.
In conjunction with the release of Beyond Traffic 2045, Foxx today designated 18 Beyond Traffic Innovation Centers across the country to lead research on the transportation challenges outlined in the report. The centers are non-profit institutions of higher education and non-profit organizations which convene leaders and other key decision-makers in each of eleven megaregions around the United States, as well as in rural communities, to discuss these challenges and coordinate related research, curriculum, outreach, and other activities.