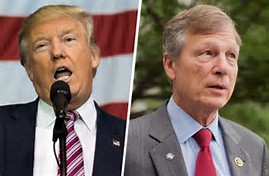 The lawmaker who lost a bid in Congress to delay the upcoming electronic logging mandate is now appealing directly to President Trump to issue an executive order providing an immediate waiver for all truckers.
Rep. Brian Babin, R-Texas, sent Trump a letter yesterday pleading with him to delay the mandate “as long as possible, but at a bare minimum, I would encourage an initial waiver for all sectors until April 1, 2018” He expressed concern that the Federal Motor Carrier Safety Association is not yet able to “implement this massive, complicated regulation.”
“Millions of hardworking American truckers, farmers and small businesses need you to take immediate and decisive action to protect them from a massive new regulation that is scheduled to go into effect just 39 days from today. I am writing on their behalf with a plan to help you do just that,” the letter states.
“Accordingly, I respectfully request that you issue an Executive Order as soon as possible, instructing the Secretary of Transportation to provide an immediate waiver for all trucking sectors and operations subject to this mandate, until such time as it can be certified that implementation will not cause economic or other harm to the millions who are subject to it.”
Babin cited his three primary concerns with the mandate which, he points out, was written by the Obama administration; cost, safety and cybersecurity.
According to Babin, the Obama administration estimated the mandate will cost $2 billion in compliance costs and that, as a Republican adminstration, the people don’t want them to “mandate that every hardworking truck driver in America spend thousands of dollars on the purchase, installation and monthly service fee for a government approved tracking device.”
Babin also states that the perception that ELD’s will make roads safer is dubious and says some of the largest trucking companies with the worst safety records have already been using ELD’s for years.
As for cybersecurity, Babin points out that ELD’s connecting to the truck’s onboard computer leaves it vulnerable to being used in terror attacks. He cited a recent study on the issue by the National Motor Freight Traffic Association.
“Mr. President, rolling back the regulatory overreach of the previous administration has been one of our proudest achievements since you took office. Together, we have now used the Congressional Review Act to block 15 separate new burdensome regulations from going into effect, and the economy and stock market have responded in kind. A few powerful interests will tell you that this mandate is good for trucking, and our country, but millions of hardworking people across our country who came together exactly one year ago to elect you president profoundly disagree. I ask that you listen to those millions of voices, and give everyone at least another three months to get this right.”
The letter concludes with Babin asking Trump to act no later than Dec. 1 to truckers will have a clear understanding of intent before the scheduled deadline.