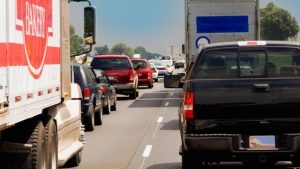 The American Transportation Research Institute (ATRI) calculates that highway traffic congestion cost the trucking industry $49.6 billion in 2014, a monetary figure resulting from delays totaling more than 728 million hours of lost productivity. That equates to 264,500 commercial truck drivers sitting idle for a working year.
More than a dozen states experienced increased costs of over $1 billion each due to congestion, with Florida and Texas leading with over $4 billion each, the group said.
“Unfortunately we’ve come to expect traffic congestion as a part of our daily lives,” noted David Congdon, CEO of Old Dominion Freight Line, in a statement.
“ATRI’s latest analysis illustrates what a significant productivity drain that congestion is on our industry and the economy at large,” he added.
Other insights ATRI gleaned from its analysis of 2014 traffic data include:
– Traffic congestion tended to be most severe in urban areas, with 88% percent of the congestion costs concentrated on only 18% of the network mileage.
– Some 95% of the trucking industry’s total congestion cost occurs in metropolitan areas.
– Traffic congestion added an average of $26,625 in additional per-unit operating costs for trucks traveling 150,000 miles annually.