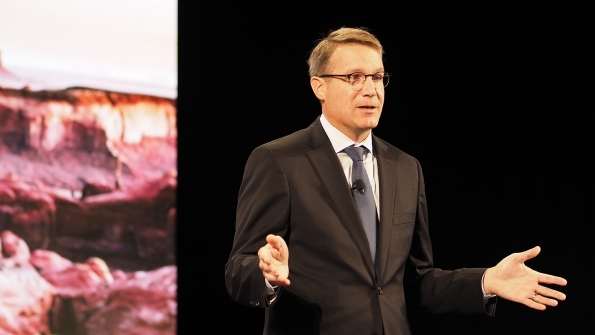 The nation has a president perhaps unlike any other in history, and there’s a big opportunity for the trucking industry if it seizes it, argued American Trucking Assns. (ATA) President and CEO Chris Spear at the open of Omnitracs’ Outlook annual user conference this week.
Spear thanked the audience of trucking innovators, as he called the fleets and businesses in attendance using the fleet management systems company’s products. But he cautioned them that the coming year will be critical for the industry to engage the Trump Administration on its needs and help shape legislation and regulation that will set the stage for the years to come.
“There have been just a few changes in the last four months in Washington, DC,” Spear said. “This president has come into power and has taken a much different approach — very unorthodox.” Spear noted that he wasn’t referring to President Trump’s well-known propensity to tweet or the “war on media” and “fake news” hubbub.
“No — I’m talking about the fact that he is the first president that I can recall in history that has come to Washington owing nobody anything. Most people that have been elected in Washington, DC, how did they get there? By raising a lot of money and by forming policy platforms that share positions or favorability to one interest or another,” Spear said, adding that there’s “nothing wrong or new about that.”
“But this president is not a politician,” Spear told listeners. “He didn’t come here on the back of a particular interest group, whether it be an environmental group, trial bar or Big Oil. This president is pretty much a freelancer, and we’ve seen that in his behavior.”
He contended that trucking must understand the sea change, essentially, that’s taken place in Washington and engage the new administration in the months ahead. And whatever their political bent or opinion on the president, Spear urged fleets and trucking to see the opportunity.
“We can debate all day whether or not this president is a wise man. I think we would all agree that he’s no fool; you don’t get elected and become the leader of the free world by not knowing what you’re doing.” Spear urged attendees to see through the clutter: “What’s important to us is what his agenda is and what it means to us as an industry; the rest of it is white noise.”
And should the industry do that, “I think we can put some pretty big wins on the board,” Spear said. “We have the opportunity to do some really amazing things.”
First and foremost among potential “wins” is a suggested 10-year, $1 trillion infrastructure bill. “We haven’t seen anything like that since Eisenhower,” Spear contended, and such a bill would give future assurance of the federal government’s commitment to transportation. President Trump “has the opportunity to come in and really change how the infrastructure looks and feels and takes our country forward,” Spear said.
“We need to understand that dynamic,” he argued, noting that ATA is continually engaging the administration and Congress on trucking’s behalf. “We need to understand what his policies are. As he takes more time to really provide that detail, we need to be a part of that dialogue.”
ELD mandate unlikely to change
“As we look at specific issues like electronic logging devices, there’s been a lot of talk in Washington and in the media about the future of that regulation,” Spear noted. But he said that mandate is unlikely to see any change.
“The fact is, this was passed by a Republican Congress. This isn’t some wild-eyed idea that some agency at [the Dept. of Transportation] hashed,” he told listeners. Rather, the ELD mandate was part of the Moving Ahead for Progress in the 21st Century Act, or MAP-21. “That was two highway bills ago, and Congress said to do it,” Spear said.
“The agencies followed through,” he continued. “And yes, it’s been litigated, and we’ve run that aground. The last stop is the Supreme Court, and in my opinion, I do not see them reversing course. I fully believe that this rule will be the law of the land in full force and effect come December 2017.”
Spear speculated that the Trump administration may not be likely to issue future mandates, however, along the lines of ELDs. “I don’t look at this president as one who’s going to favor mandates. I think he’s going to embrace innovation,” Spear said.
“He’s going to create an environment that empowers all of us to step up and lead — not follow,” he continued. “It’s our obligation. It’s our opportunity to step up to the plate and do something.
“I want to be a partner with this administration, with this Congress — not an impediment. I don’t want to go in — or my team — and say, ‘No, no, no.’ I don’t think there’s a high tolerance for that with this president. So it’s taking the time to understand what motivates him.”
Still, on that note, Spear contended that the trucking industry has an advantage in that it is a critical driver of the American economy. “It’s not about trucking or our industry; it’s about what’s good for the economy, what’s good for America, what’s good for job growth,” Spear said.
“If you think about it, we’re the catalyst for all of that. Our story resonates better than probably anybody else’s in Washington, DC. We have the opportunity to really partner with this White House and Congress and be able to help them accomplish their goals, and in doing so, we’ll be creating an environment that’s good, long-term, for our industry,” he contended.