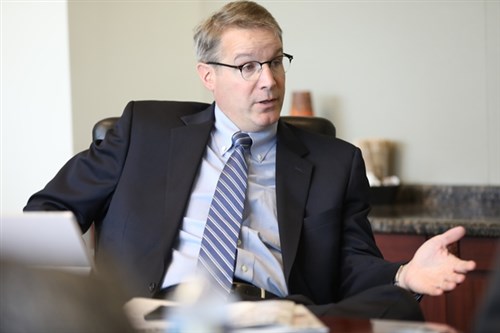 It can be said that the Owner-Operator Independent Drivers Association (OOIDA) and the American Trucking Associations (ATA) occasionally see eye-to-eye but most of the time don’t agree.
But a story published by DC Velocity April 30 portrayed ATA President Chris Spear as lashing out in anger toward OOIDA, calling the group “combative” and its approaches “meaningless.”
Spear was also quoted in the DC Velocity story as saying he and his family had “received death threats from OOIDA interests” and that “persons affiliated with OOIDA interests have threatened to bomb ATA’s headquarters in Arlington, Va.”
The story said Spear made the comments in answer to questions about OOIDA following his keynote address at the Nasstrac Shippers Conference & Transportation Expo 2018 in Orlando, Florida, April 12-15.
OOIDA May 1 issued a formal response, saying “Mr. Spear’s suggestion that OOIDA employs questionable tactics and threatens harm on others is patently false.”
It went on to say that “ … Mr. Spear simply feels ATA’s positions and policies are vulnerable and he is lashing out with falsehoods and misrepresentations.”
Spear was traveling in Europe and couldn’t be reached for comment or clarification as to the Velocity story, but Sean McNally, ATA vice president of public affairs and press secretary, said while he was not in Florida for the event at which Spear spoke, “I understand … at the conclusion of his remarks and presentation he was asked specifically about the OOIDA issue and offered a candid response based on the experiences of ATA staff in recent months.
“That said, ATA’s mission is to secure victories on behalf of our industry and our members. We’ve worked hard to build broad coalitions, reaching out to those who have an interest in the future of this industry, including OOIDA, and we will continue to do so as we advocate on behalf of the entire trucking industry. We hope OOIDA’s members can see the value in joining the broader industry and support change.”
OOIDA in its already mentioned response said, “most small-business truckers — who represent the majority of motor carriers — have objected to ATA’s policies in a firm, but extremely respectful and civil manner.”
Both OOIDA and ATA have agreed on such issues as supporting Truckers Against Trafficking and have expressed their desires to promote the trucking industry’s best interests and put the industry in the best light possible.
Some major disagreements have come over regulations, however, the most recent being the ELD mandate, which was vehemently opposed by OOIDA and vigorously supported by ATA.