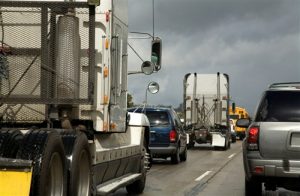 ARLINGTON, Va. – Between 2016 and 2027, overall freight tonnage is expected to grow a total of 35 percent and the amount of freight moved by trucks will grow slightly less at 27 percent, says the American Trucking Associations’ latest U.S. Freight Transportation Forecast.
The Forecast goes to 2027 and shows growth in both overall freight volumes and in the amount of goods moved by truck.
“As we continue to see growth in the overall economy, particularly due to manufacturing, consumer spending and international trade, we will also see increases in the amount of freight moved in America’s trucks,” said ATA Chief Economist Bob Costello.
Overall, other modes of transportation – truck, rail and water – will lose market share to pipeline, which will grow from 10.5 percent to 17.4 percent between 2016 and 2027 primarily as a result of growth in the U.S. energy sector.
Specific to trucking, truckload volumes will grow 2 percent annually between 2016 and 2022 and 1.6 percent per year after that until 2027. Less-than-truckload volume will grow year after year 3 percent through 2022 and 2.8 percent from 2023 to 2027. Private carrier volumes will grow 2.3 percent annually until 2022 and 2.1 percent each year over the next five years.
“No one can know exactly what the future holds for our economy and industry, but Freight Forecast has proven to be a valuable tool for everyone from industry leaders to government policy makers,” said ATA President and CEO Chris Spear. “We do know as long as our economy continues to grow, trucks will continue to move the vast majority of America’s goods, underscoring our industry’s critical role in our country’s future.”