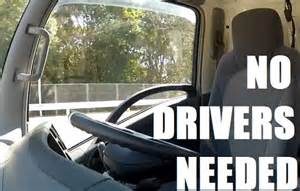 A few months ago, we published an article about investing in self driving trucks and described just how massive the opportunity is in this space given that trucking is a $700 billion industry. There are not just opportunities in self driving, but trucking technology in general. For retail investors, there aren’t many opportunities to get exposure to autonomous trucking yet. This is because many of the companies making headway towards bringing the self driving truck to fruition are all private. Before we even get to the era of self driving trucks, there is plenty of innovation to be had in developing trucking technology that helps increase safety and efficiency. Here are 5 startups working on trucking technology.
Otto Logo
Founded by ex-Googlers just this year, Otto is led by the former Technical Lead of Google’s autonomous car division. Instead of trying to build self driving trucks, Otto is developing kits that can upgrade any truck to a self driving vehicle. In May of this year, Otto was said to have come out of stealth mode which seems to be nothing more than they unveiled a simple website with a video and a listing of job openings. In that video, we see a truck driver filling out some paperwork in the back of his truck and occasionally glancing at the empty driver seat. The truck, adorned with all kinds of external cameras and sensors, goes barreling down the highway with a value proposition that we can only assume would not appeal to the trucker who now get’s paid less because he drives less? Clearly, Otto is eating this apple one bite at a time and soon you won’t need that preoccupied driver in the backseat.
GreenRoad Logo
Founded in 2004, GreenRoad has taken in nearly $100 million in funding so far to develop trucking technology that “enables commercial fleets, insurers and consumers to measure, improve and sustain safe and fuel-efficient driving behavior“. Since inception, GreenRoad has monitored over 6 billion miles of trucking trips which means they have accumulated lots of valuable “big data“. Their value proposition is as follows:
GreenRoad Savings
You might think that all this “big data” being accumulated has some value to insurance companies, and you’d be exactly right. GreenRoad has partnered with one of the largest fleet insurers in North America and globally, Zurich, to integrate a fleet risk management solution called Zurich Fleet Intelligence (ZFI). With their Series G funding round closing in May of last year, GreenRoad investors must be eagerly looking for an exit.
Smartdrive Logo
Founded in 2004, SmartDrive has taken in just over $180 million from investors that include Stanford University and Peter Thiel’s Founders Fund. All that money has been spent on building a trucking technology solution that “gives fleets and drivers unprecedented driving performance insight and analysis, helping save fuel, expenses and lives“. SmartDrive is building their own valuable big data sets and claims to have “amassed the world’s largest and fastest growing database of risky driving events: over 43,000,000 and counting”. That seems like a ridiculous amount of risky driving events, but we’re just taking that statement verbatim from their webpage. From what we could glean about their technology, they simply stream real-time video of the truck drivers which they call “game films” to make sure they operate in the most efficient and safe manner possible. According to SmartDrive, “risky driving drops by as much as 50% within the first six weeks, and up to 70% by the end of the 1st year“. That’s probably because the drivers know they’re being videoed.
Zonar Logo
Founded in 2001, Seattle based Zonar Systems has taken in just one funding round of $50 million from none other than Daimler, the world’s biggest manufacturer of commercial vehicles to develop “innovative technology solutions that are shaping the future of smart fleet management“. While Zonar started out as a tool to perform pre- and post-trip inspections, it eventually evolved into a “telemetrics” solution that provides GPS location, fuel efficiency, and even remote diagnostics for vehicles on their network. Zonar must be accumulating some massive big data sets considering that they have over 450,000 subscribers to their solution including trucking fleets, commercial vehicles and school buses.
Peloton Logo
We talked about this company before in our previous article on autonomous trucking. Founded in 2011, Silicon Valley startup Peloton Technology has taken in $18 million so far from investors that include Lockheed Martin and Intel. The Company is working on a convoy concept where the truck drivers will remain fully engaged while retaining steering control, while the system will operate the acceleration and braking similar to how your cruise control works. Peloton calls this concept “truck platooning” and they claim you can save an average of 7% in fuel costs per vehicle by using this trucking technology solution. It would be just as easy to have a “truck platoon” with a driver in the lead truck and all the others under autonomous control. Just like Otto, once you have a driver that can spend his time in the truck doing other things, why do you need the driver anymore?