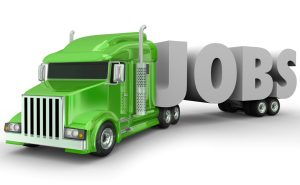 Closing out 2015 with 1.462 million jobs, the for-hire trucking industry reached record high employment with the addition of 5,300 jobs in December, according to the Bureau of Labor Statistics.
Overall, trucking grew by 19,100 jobs last year, with the biggest gain in May. Most of the progress occurred during the spring and early summer. In September, the largest loss of the year occurred with 3,300 jobs eliminated.
The larger transportation and warehousing sector added 23,100 jobs in December, reflecting the general growth in hiring across all sectors in 2015. Collectively, employers added 292,000 jobs last month. Unemployment remains flat at 5 percent.
Source: Bureau of Labor Statistics