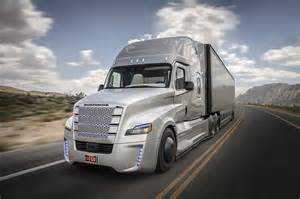 Former employees from Google, Apple and Tesla have jumped into the “self-driving trucks” waters, saying they’ll develop a retrofittable autonomous-driving technology for on-highway commercial heavy trucks.
The company, called Otto, has outfitted three cabs with its automated technology and conducted its first extended test on public highways in Nevada last weekend.
Heading up the effort is Anthony Levandowski, who left his job working at Google on their self-driving car to found Otto with two other former Google employees, Lior Ron and Don Burnette, and another robotics expert, Claire Delaunay.
In a blog post, Levandowski and Ron write, “At the heart of our vision is the belief that self-driving tech is the key for creating a more sustainable, productive — and above all, safer — transportation future. … We are at Otto because we’re driven by an urgency and deep obligation to accelerate the future….
“We are developing a suite of sensors, software and truck enhancements coming together in a product that can be quickly outfitted on existing trucks.”
Otto is not the first to demonstrate autonomous truck technology. Daimler Trucks last fall in Germany ran a real-world test of what it says is the first series-production truck to operate on an automated basis on the highway. This followed on-highway demonstrations of concept vehicles, the Freightliner Inspiration truck in the U.S. in Nevada (the first autonomous truck legally licensed to travel on public highways in the country) and the Future Truck 2025 earlier in Germany.
However, even Daimler admits that there is a long road ahead to get to true “self driving trucks,” noting that It will take rewriting a sheaf of regulations and presenting a compelling business case on safety and fuel-economy gains to fleet operators before a Level 3 autonomous truck, like the Freightliner Inspiration demonstration truck, becomes a production tractor.
In an Associated Press story on the new Otto venture, Steven Shladover, program manager for mobility at the University of California’s Partners for Advanced Transportation Technology, told AP Technology Writer Michael Liedtke that the technology has a long way to go before government regulators trust it to handle a rig at highway speeds without a driver in the seat.
“I don’t want to be on that highway when there is nobody there to take over a truck with 80,000 pounds of cargo, and I don’t think I know anyone else who would want to be,” Shladover said. “The consequences of any kind of failure in any component would be too severe.”
According to AP, Otto is looking for 1,000 volunteers to have the system installed on their trucks to help fine-tune the technology. “The volunteer truckers would still be expected to seize the wheel and take control of the truck if the technology fails or the driving conditions make it unsafe to remain in autonomous mode, mirroring the laws governing tests of self-driving cars on public streets and highways.”
The New York Times reports that while California laws prohibit Otto’s vision of an autonomous truck operating with the driver snoozing in the sleeper, other state laws would allow it.
As the paper reports: “‘Right now, if you want to drive across Texas with nobody at the wheel, you’re 100 percent legal,’ said Mr. Levandowski, who as a Google engineer, helped write draft legislation that permitted self-driving vehicles, which later became law in Nevada.”
(Link) Video: In the cab of Freightliner’s autonomous truck